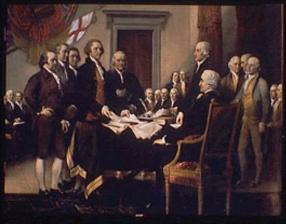 In the midst of the American Revolutionary War, the Second Continental Congress voted to approve a resolution of independence. The document which was prepared by a committee of five, with Thomas Jefferson as its principle author, would forever be called the Declaration of Independence. Congress would debate and revise the Declaration and give it final approval on July 4, 1776. By signing this document, these brave men knew they were committing an act of treason against the King of England. John Hancock said, Gentleman, the price on my head has just been doubled”. One of the revisions that took place in the Declaration was the adding of “with a firm reliance on the protection of divine providence”, over Jefferson’s objections, Congress insisted on these words.

These men showed great courage and resolve, the source of which was their trust in God and their belief that the establishing of this new nation was by divine will and that God had a purpose for America. Much has been written about the perseverance, dedication and heroic acts of our founding fathers, such as, George Washington, John Adams and many
others. However, there is one hero of the Revolutionary War that most Americans have never heard of, Haym Salomon, a Jewish immigrant from Poland. Immediately after his arrival to America in 1772, I laym joined the medical revolutionary group called the Sons of Liberty. He also became a very successful business man. In 1975, the United States issued a commemorative stamp in his honor. On the back of the stamp was printed: “Financial hero-businessman and broker Hayn: Salomon was responsible for raising most of the money needed to finance the American Revolution and later saved the new nation from collapse”.

The first Jews arrived in America in 1654 from Brazil, escaping the Portuguese persecution. In the new America, Jews were allowed fill rights to worship, trade and property ownership. During the Revolutionary War almost the entire Jewish population supported the American cause. After his election as the first President of the United States in 1789, George Washington received several letters from the Jewish centers around the young nation congratulating him. Washington’s written response to these letters would set the tone for America’s attitudes towards the Jewish people. In one letter he would connect the God of Israel who delivered the children of Abraham from Egypt to being the same God who established the United States. In another letter, the President referred to Micah 4:3-4 when he expressed his desire for the Jewish people to each sit under his own vine and fig tree, referring to a time when Messiah would be presented as Judge of the nations and end war and bring universal peace. The first President used this verse to pronounce a blessing on the children of Abraham.

The greatness of this nation can be traced back to a promise made by Yahweh to Abraham in Genesis 12:3, “I will bless those who bless you and I will curse those who curse you”. The Bible shows us that God creates and establishes with purpose and foreknowledge. I believe that the purpose for God establishing this great country was to create a sanctuary of freedom for all the world’s persecuted peoples, both Jews and Gentiles, to live and worship and to build their lives without the fear of persecution. That purpose also includes the U.S. being an ally to the nation of Israel, as well as Americans finding 90% of the Gospel preached around the world. What do England, Egypt, France, Greece, Italy, Iran, Iraq, Italy and Russia have in common? They all were world powers at one time in history and they all have a history of mistreating the Jewish people and taking sides with the enemies of Israel. The result, none are the world powers today that they once were. In His Word, God promises to bring judgment on the nations who want to divide the land of Israel and on those who devour her, that they shall be devoured and that those who prey on her shall become prey. 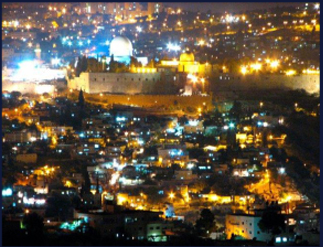 God also promised that Israel’s enemies shall “drink from the cup of His fury” (Joel 3:1-3, Matt. 25, Zech 12:1-3, Jer. 30:16). In his book, Eye to Eye: Facing the Consequences of Dividing Israel, author Bill Koenig uses current situations in the U.S. to show that God is keeping His promises to curse those who curse the seed of Abraham. Inhis book he shows that 9 of the 10 costliest insurance events, 6 of 7 of the costliest hurricanes, 3 of the 4 largest tornado out breaks, 9 of 10 natural disasters as ranked by FEMA relief coast and 2 of the largets terrorist events have all transpired on the very same day or within 24 hours of U.S. Presidents Bus Sr., Clinton and Bush applying pressure on the Israeli government to trade land for peace. In recent months our current administration has put increasingly more pressure on Israel to stop building homes in Jerusalem and to give up more land for peace and has refused to speak to the Prime Minister of Israel. The result of this mistreatment of America’s greatest ally (Israel) is the greatest man-made disaster in the history of the world, the oil spill in the Gulf. Some would write this off as mere coincidence or some would say God is literally keeping His promise made to Abraham. The Jewish connection to America runs deep into the soil of our nation’s history, too deep in fact for these things to be mere coincidence.

One thing is clear, if we Americans are going to continue to celebrate our independence and freedom in the figure, we must continue to support the nation of Israel and God will keep His promise to bless those who bless her. While I will never support or defend the inhumane treatment of anyone, I will not condemn Israel for defending herself. Israel is the only democratic nation in the Middle East and the only true ally that America has in that part of the world. We need to be watchmen on the wall and pray for Israel’s peace and safety.