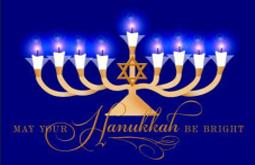 Hanukkah usually falls in early to mid December and if you walk through the Jewish Quarter of the Old City of Jerusalem or a Jewish neighborhood in many parts of the world, you will see many Hanukkah menorahs lit up and on display in the windows. Many people ask me why a Christian Church would celebrate Hanukkah. If they understood properly the celebration of Hanukkah, many would see that it can have a significant impact on our spiritual lives. In the account of the first Hanukkah, after the Jews had defeated an evil, Seleucid general who had desecrated and paganized the Temple in Jerusalem, the Temple had to be cleaned and rededicated to God. This took place in approximately 168 B.C. Hanukkah, which means  “dedication”, is also called the “festival of lights”. This speaks of the great miracle that

happened on that first Hanukkah. At the time of the dedication, only a single cruse of oil was found, enough to light the menorah for only one day. In order to rededicate the Temple, the menorah needed to be lit for eight days. This one cruse of oil burned for the entire eight days, thus this miracle led to the “festival of lights”.  The Hanukkah menorah we light today is reminiscent of the great golden menorah that was lit in the Holy Place of the Temple with the flames representing the eternal light and truth of the Word of God. The apostle Paul tells us that we are the temple of the living God, the Spirit of Messiah dwells in those whose lives are dedicated to Yahweh. Jesus’ healing of the man who had been born blind took place during the festival of lights (Hanukkah). What a wonderful fitting miracle that time of year that the gift of light would be given to blind eyes! (John 9 and 10) 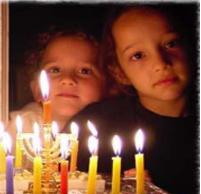 As Christians, Hanukkah should remind us that a priestly calling resides in us and united together, the Bible calls us a “Kingdom of priests, a Holy nation”. As a kingdom of priests we are to allow the love (light) of God to shine forth in our lives so that the world may see Jesus the Messiah in us. So Hanukkah kor us is a time to reflect on our own lives and to rededicate our lives to serve God better in the New Year to come. While Hanukkah is not a Jewish Christmas, there is a connection. First, both Hanukkah and Christmas appear in the winter season, one on the 25th of Kislev (Jewish calendar month) and one on the 25th of December. Together they serve as a visual reminder of God’s light and kingship manifesting in the world. In Hanukkah, God’s light supernaturally illuminated the Temple and inspired a nation. In Christmas, a little over a century from the first Hanukkah, His light supernaturally indwelled a child and inspired a whole world. Just consider this, without Hanukkah there would not have been Christmas. If God had not miraculously delivered the nation of Israel from the seductions of Hellenism, the restoration of a Temple suitable for divine worship may not have ever happened.

Without the perseverance of a Holy people willing to put on the yoke of God’s Kingdom and defeat an evil enemy, the fullness of time suitable for the arrival of God’s Messiah (Jesus) would not have come. Therefore, as Christians, we cherish and celebrate both I Ianukkah and Christmas. Although the Festival of Lights (Hanukkah) is not the Jewish Christmas, it is related to the Christmas we celebrate in remembrance of when the Light of the world entered into human affairs to announce the arrival of the Kingdom of God.

Pastor Deer can be reached by email at [antispambot emailadd=”pbd90@yahoo.com”]